The “Speak Now World Tour” was Taylor’s second concert tour, launched in support of her third studio album, Speak Now (2010). It ran from February 2011 to March 2012 and grossed over $123 million. The show’s production was very theatrical and incorporated elements of Broadway musicals.
The general feel of the “Speak Now World Tour” was that of a dreamy, old-fashioned kid who had been given the chance to bring her pre-adolescent fantasies to life. Each song seemed like an encapsulated story of love, betrayal, fears or strength. It was a romantic vision, and the scale of it was remarkable — featuring a two-story stage, “pyro” displays, dancers, aerialists, and nine costume changes. The show felt beyond music, so deeply woven were the theatrical and balletic elements. Special guests were diverse and unpredictable — Taylor opted to surprise fans with duets with the likes of Jason Mraz, James Taylor, Selena Gomez, Usher, Hayley Williams and many others. She contributed to every detail of the show: “You have to, or else you’ll have these surprises pop up. And you don’t ever want to be caught by surprise when you’re touring.”

While promoting the Speak Now (2010) album, Taylor mentioned her excitement for her upcoming tour, teasing that it was going to be “big” and “extensive”. On November 23, 2010, finally various media outlets announced the “Speak Now World Tour.” It followed her successful “Fearless Tour” which played for over 100 dates in over five countries and marked her first one to perform in a stadium:

«I’m so excited to go back out on tour again in 2011! The 'Fearless Tour' was so much fun and even more unforgettable than I ever imagined, and I can't wait to get back out and play my new music from Speak Now! The fans have been so amazing and I'm thrilled to play in new cities around the world and meet even more of my fans in 2011!»

A show on the “Speak Now World Tour” began with the massing, hours before showtime, of fans outside the concert venue. There was a uniform: sundresses, cowboy boots. (Taylor’s look during her early years.) Fans curled their hair into loose ringlets and wrote the number 13 on their hands. Many also carried signs, in the hope of being selected by Taylor’s mother for the T-Party. For example: “I would be ENCHANTED to see you.” Inside, Andrea Swift walked the aisles of the arena, smiling and waving, giving the occasional hug, and took her place near the soundstage.

Sparks flew as Taylor opened her show with “Sparks Fly.” Dressed in a glittery gold dress, she emerged from the middle of her runway in a cloud of smoke with gold fireworks bursting behind her above the stage, as fans were screaming her name. White floodlights and purple spotlights bathed the stage and the audience while aerialists spun on stage, holding even more pyrotechnics.

The opening act left jaws hanging as fans quickly realized the show was going to be much more than your typical country concert. Taylor was silent after her first number, clearly soaking in the excitement of her audience, before she started singing “Mine.”

Taylor had said she drew on her love of Broadway when crafting her “Speak Now World Tour,” and there was evidence of that throughout — from “The Story of Us” delivered on a grand gold filigree staircase with a cadre of theater-worthy dancers to a snowy white winter scene for “Back to December.” During “Mean,” the dancers provided silly scenarios for the lyrics. The talent showcase continued between songs. To give Taylor time for some of her nine costume changes, members of her eight-piece band — and other performers such as a stage-sweeping, tap-dancing mime — entertained the crowd. As she launched into her first hit, the solidly country “Our Song,” her musicians sat behind her on a homey bandstand, and the fiddle roared. The song “Speak Now,” was played out with a wedding on stage, telling the tale of a wedding being interrupted when the preacher asks for any objections.

Taylor’s costume changes elaborated the Broadway look from glamorous gowns, ruffled, vintage costumes and glitzy short dresses. Throughout the concert she put on a one of a kind performance, including fireworks during “Dear John”, playing the piano as snow-like glitter fell from the ceiling for “Back to December” and walking through the crowd before she sat down to play several songs under an iridescent tree. There, she performed “Fearless” and “Last Kiss” with a ukulele and an acoustic guitar, while sitting underneath the purple and white, revolving lighted tree on a B-stage.

Taylor ended the show with her hit song “Love Story,” in which she soared above the audience on a “Romeo and Juliet” style balcony structure.

Another brilliant move on Taylor’s part was the use of acoustic cover versions that paid tribute to a local artist in certain cities. This was to include elements of spontaneity in what might have been a rehearsed, pre-programmed show, Taylor said: “You’ll have a lot of people who will come to more than one show, and I want them to get a different experience every time.“ The covers ranged from a moving performance of “Fire and Rain” by James Taylor at Madison Square Garden to rousing covers of Switchfoot, Fall Out Boy and many others.

During the North American and Australasian tour legs, Taylor wrote different song lyrics, and occasionally quotes from famous speeches and movies, on her left arm for each performance. The New Yorker cited the practice as an example of her “keen understanding of what fuels fan obsession in the first place: a desire for intimacy between singer and listener”.

«One day at rehearsals I was having a rough day, and I wrote a lyric by my friend Selena Gomez on my arm: 'You’ve got every right to a beautiful life.' It looked cool, so now I put lyrics on my arm every night. It’s like a mood ring.»

At every stop on the tour, six workers take five hours to transform a cinder-block holding room into an exotic tented emporium to greet fans, called the “T-Party”: a central column is decorated with snapshots of Taylor and her friends, and swaths of purple, yellow, green, and red silk are draped from the top, Maypole style, forming a billowy ceiling. Virtually everything in the T-Party room was picked out by Taylor herself.

As is tradition for Taylor’s shows, her mother Andrea Swift or an assistant scouted the arena and selected the most enthusiastic fans. She gave each lucky fan a wristband and invited them backstage later. The idea behind the T-Party dates to Taylor’s early years, when she was opening for other country stars — Rascal Flatts, Brad Paisley, George Strait. “She would wait until the headliner got back to his bus, was having his nightcap, and was going to bed,” Andrea Swift told The New Yorker in 2011. “And that’s when we would hit the concourse level for her to sign autographs.” She said that Taylor was unimpressed with the way meet and greets usually worked. “She was, like, ‘You know, if I was ever a headliner I would want to pick out people in the audience that were just so crazy and fanatical—they’d be the ones that got to come back.’ She didn’t want you to V.I.P. your way in or bribe someone or sob-story your way in. It’s just basically the fans who it would really mean the world to just sit down and have fun and talk to her.”

Taylor invited a select set of fans to her final dress rehearsal of the “Speak Now World Tour” on May 21, 2011, as her way to raise money for the victims of the tornadoes that have ravaged the south that year. The Nashville concert, dubbed “Speak Now…Help Now,” raised over $750,000, and 100 percent of ticket sales were donated directly to the tornado victims via the “Speak Now…Help Now Fund” established through the Community Foundation of Middle Tennessee. It also gave Swifties a chance to see Taylor’s new stage set up in advance of the tour launch. It was a gift that kept on giving to both fans and victims of the tornadoes. Fans not in Tennessee were able to view some of the show via a live stream, too. Taylor spoke about how she came up with the plan to allow fans to view the rehearsal, saying that a dry run was what gave her the bright idea in the first place:

«One of my dancers lives in Alabama and showed photos of a backyard cyclone and I thought, 'If there was any way I could help with damage done and families who lost homes, I had to think of one.' Here we are at a rehearsal, in an arena, with empty seats. What if we fill those seats? And give the proceeds to the victims of the tornadoes?»

During the course of the two-hour show’s theatrical presentation, Taylor showed off her array of talents and played acoustic guitar, electric guitar, ukulele, banjo and piano. It was an out and out success, as fans started lining up for the “Speak Now…Help Now” special event at Nashville’s Bridgestone Arena around 6AM on Friday, more than 36 hours before doors opened for the capacity crowd of 13,700 in attendance.

Critics have praised the tour, with Billboard stating that “Swift’s two-hour production was an overwhelming experience. There’s an enormous amount of detail that worked to make the ‘Speak Now Tour’ a sort of next step in country concert presentation….it blended the pacing, the music and the artist’s personality in a way that transfixed.” The Korean Focus Times praised it by saying: “Taylor Swift charms Korea in style, radiant…with pitch-perfect and sincere vocals. The dedication of the fans present was boundless, the cheers of the crowd were sometimes louder than the music itself.” The New York Times claimed the tour “went off, as did every number, with clockwork professionalism and thousands of voices singing along and screaming between the lines. Ms. Swift, 22, is their superstar….her songs are taut, tuneful narratives.”

The “Speak Now World Tour” was ranked 10th in Pollstar‘s “Top 50 Worldwide Tour (Mid-Year)”, earning over $40 million. At the conclusion of 2011, the tour was placed fourth on Pollstar‘s annual “Top 25 Worldwide Tours”, earning $104.2 million with 100 shows. This made it the highest-grossing female and solo tour of 2011.

On August 10, 2011, Taylor released a music video for “Sparks Fly”, which featured clips taken from four different locations of the tour, which includes one from the show in Newark, New Jersey. The footage with the rain was captured during one of the summer shows at Gillette Stadium in Foxboro Massachusetts. A live album of the tour titled Speak Now World Tour — Live was released on November 21, 2011. The DVD and Blu-ray included with the CD feature all seventeen song performances taken from the North American leg of the tour. 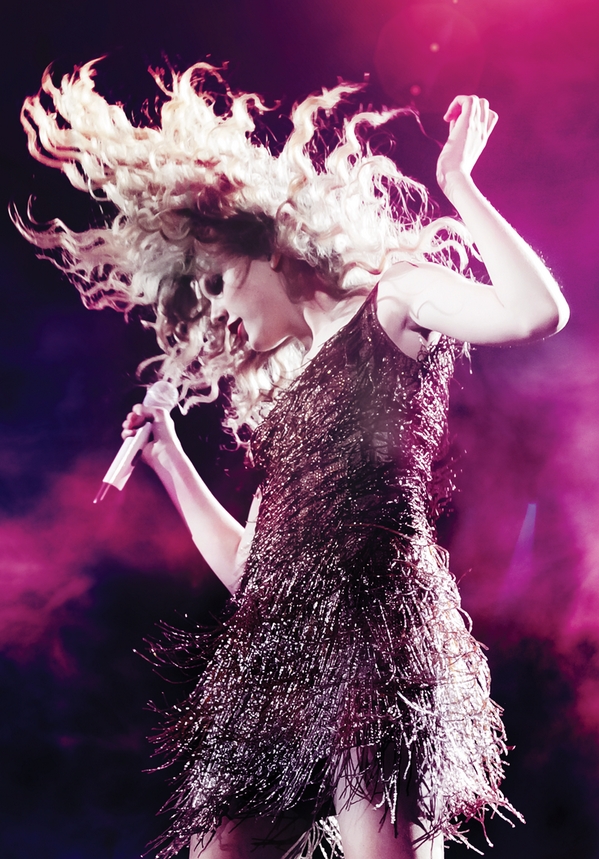