In June 2019, the masters to Taylor’s first six studio albums were acquired by talent manager Scooter Braun as part of his acquisition of Big Machine Records, her record company until 2018. Taylor said she had been trying to buy the masters for years, but that Big Machine had offered unfavorable conditions. She condemned Braun’s purchase and denounced him as an “incessant, manipulative bully”. Big Machine’s former president Scott Borchetta said that Taylor had declined an opportunity to buy the masters and challenged her claims. However, his statement was later proven to be false. The controversy and subsequent disputes were highly publicized, attracting widespread attention and media coverage. It prompted a discourse on artists’ rights, intellectual property, and industrial ethics.
Taylor signed a record deal in 2005 which gave Big Machine Records the ownership of the masters to her first six albums. Since the sale of her masters, Taylor and Big Machine have had a series of disputes, including her allegations of Big Machine blocking her from using her older material for the American Music Awards of 2019 and the documentary Miss Americana (2020), as well as an unauthorized release of Live from Clear Channel Stripped (2008) in 2020. Taylor announced she would re-record her first six studio albums to gain ownership of her back catalog. On April 9, 2021, she released Fearless (Taylor’s Version), the re-recording of her 2008 album Fearless. The other albums are slated to follow.

A master is the first recording of an audio recording, from which copies are made for sales and distribution. The owner of the master, therefore, owns all formats of the recording, such as digital versions for download or on streaming platforms, or physical versions available on CDs and vinyl records. Anyone who wishes to reproduce a record must ask permission from the master owner. Before the emergence of digital music platforms, musicians relied on record labels to promote their music through means such as airplay or physical distributions to retailers. These labels would typically require artists to sign record deals which would give them the rights to their masters “in perpetuity”.

After her contract with Big Machine Records expired in November 2018, Taylor signed a new contract with Universal Music Group record label Republic Records. Variety reported that to that point Taylor’s catalog constituted around 80% of Big Machine’s revenue. Taylor revealed an element as part of her Republic Records contract which affected all artists under Universal: any sale of the company’s shares in Spotify (the largest on-demand music streaming platform) resulted in equity for all Universal artists. The contract with Republic Records also allowed Taylor to fully own the masters to albums distributed by them, starting with her 2019 album Lover.

In 2019, Big Machine Records, which released Taylor’s first six studio albums, was acquired (reportedly for $300 million) by talent manager and businessman Scooter Braun and his company Ithaca Holdings. The acquisition was financed by the Carlyle Group and several other private equity firms. As part of the acquisition, ownership of the masters to Taylor’s first six studio albums transferred to Braun.

On June 30, the day of Big Machine’s announcement, Taylor denounced the acquisition on Tumblr. She stated that she had tried to buy her masters for years, but was not given a chance unless she signed another contract, which she was not willing to do.

«For years I asked, pleaded for a chance to own my work. Instead I was given an opportunity to sign back up to Big Machine Records and 'earn' one album back at a time, one for every new one I turned in. [...] I learned about Scooter Braun's purchase of my masters as it was announced to the world. All I could think about was the incessant, manipulative bullying I've received at his hands for years.»

While she knew that Big Machine was for sale, Taylor said that she was unaware Braun would be the buyer, whom she described as an “incessant, manipulative bully”: “Essentially, my musical legacy is about to lie in the hands of someone who tried to dismantle it.” She accused Borchetta of betraying her loyalty by selling her catalog to Braun, whom Borchetta had known for his “bullying” towards Taylor.

In response, Borchetta published a blog post titled “It’s Time For Some Truth” on the Big Machine website. On June 25, 2019, Big Machine shareholders and Braun’s Ithaca Holdings held a phone call regarding the transaction. While Taylor’s father, Scott Swift, was one of Big Machine’s minority shareholders (holding 4% of stakes), he did not join the phone call due to a “very strict” non-disclosure agreement. A final call was held on June 28, when Scott Swift was represented by a lawyer from Taylor’s management company, 13 Management.

Borchetta said he had texted Taylor on June 29, challenging her claim that she had not been aware of Braun’s transaction beforehand. He denied that Taylor had been hostile towards Braun, whom he described as a “good source of information”. He also posted a text message he alleged Taylor had sent before signing to Republic Records; in the message, Taylor said she would accept another seven-year contract with Big Machine on the condition that she took ownership of her audiovisual works. Borchetta agreed, but asked for a ten-year contract. The authenticity of the text message has not been verified.

In November 2019, Taylor accused Braun and Borchetta of blocking her from performing her older songs at the American Music Awards of 2019 and from using older material for her 2020 documentary Miss Americana. While Big Machine Records initially rejected Taylor’s claim, they later issued a statement saying they had “agreed to grant all licenses of their artists’ performances to stream post show and for re-broadcast on mutually approved platforms” for the American Music Awards; the statement did not mention Taylor. The statement also said that Big Machine had negotiated with the producer of the award show, Dick Clark Productions; Dick Clark Productions contested that they never agreed to issue any statement with Big Machine.

Braun said he received death threats from Taylor’s fans, and wanted to have a conversation with Taylor on the matter. In April 2020, Big Machine released Live from Clear Channel Stripped 2008, a live album of Taylor’s performances at a 2008 radio show for Clear Channel. Taylor said she did not authorize the release, and called it “shameless greed.”

In October 2020, Braun sold the masters, videos and artworks to Shamrock Holdings, an American private equity firm owned by the Disney estate, for reportedly $300 million. Taylor said that Braun offered her a chance at bidding on her masters on the condition of signing a non-disclosure agreement regarding her public statements on Braun, which she refused. She also declined an offer by Shamrock to become an equity partner, on the grounds that Braun and Ithaca Holdings would continue to financially benefit from her work.

Re-Recording of Back Catalog

Taylor had announced in August 2019 that she would re-record and release her first six albums so as to completely own her music. She began re-recording her back catalog in November 2020. The re-recorded albums are identified by the note “(Taylor’s Version)” added to all album and song titles, to tell them apart from the older recordings. 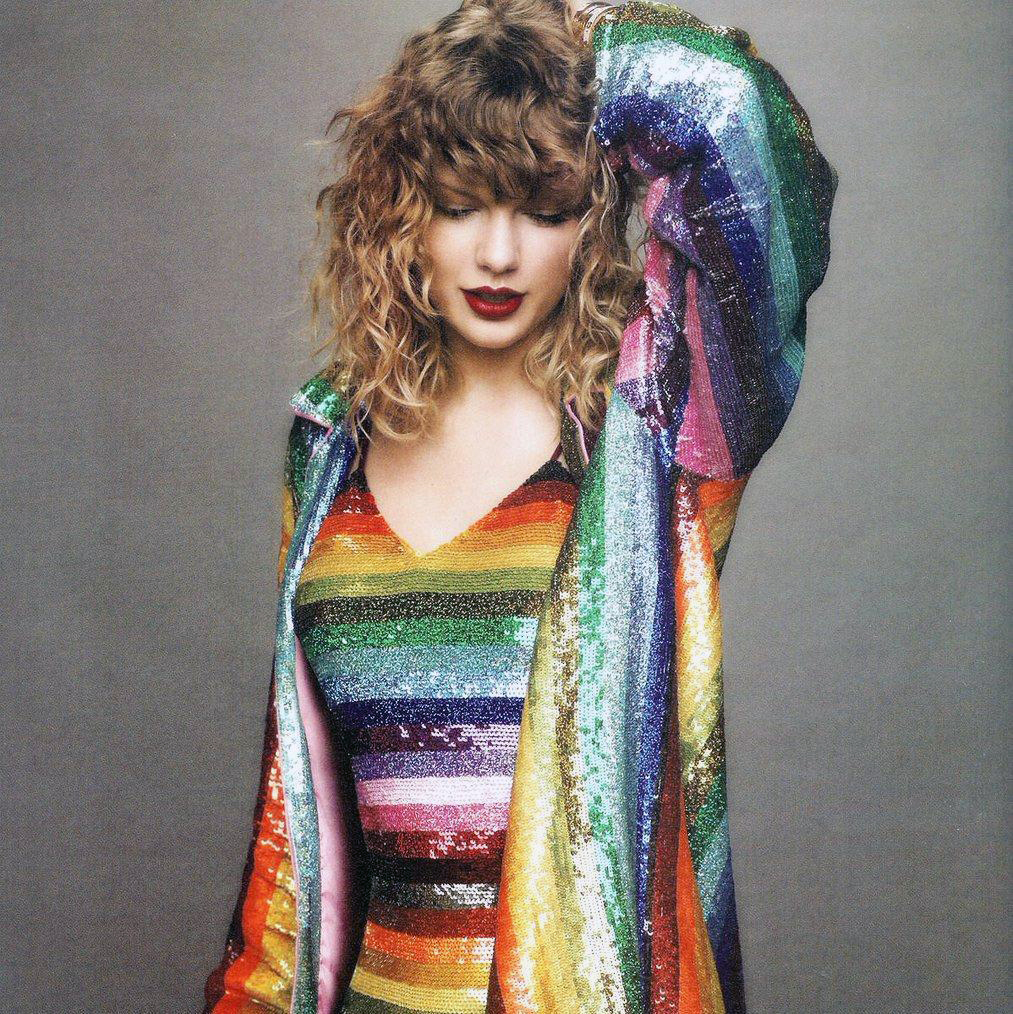 Publications highlighted Taylor’s public opposition to the acquisition of her masters as trailblazing: while the issue of master ownership and the conflicts between record labels and artists such as Prince, The Beatles, Janet Jackson, and Def Leppard have been prevalent, Taylor was one of the few to make it public. Her social media posts prompted both support and opposition from her peers; those who supported include Selena Gomez, Halsey, Sky Ferreira and Iggy Azalea, who cited Taylor’s reason that artists should rightfully own their music. Those who opposed include Braun’s clients Justin Bieber and Demi Lovato, who believed he was a man of good character, and that the decision was not personal. In May 2021, Olivia Rodrigo stated that she negotiated with her record label to own her music’s masters herself, after observing Taylor’s battle. Joe Jonas said that he wishes to re-record Jonas Brothers’ back catalog just like Taylor.

Rolling Stone described the masters dispute as one of the 50 “most important moments” of the music industry in the 2010s decade: “While Braun and Borchetta vehemently contest [Taylor’s claims], the actual facts of the situation may not matter — as Taylor is using every tool she’s got, including pleading directly to a zealous fanbase for help, to establish herself as a self-made artist who calls her own shots.” According to The Guardian, Taylor’s masters dispute hinted at a change in the digital music era, where artists are more informed of their ownership and would not rely on record labels for marketing as heavily as in the past. Variety wrote that Taylor’s highly publicized move to re-record her back catalog would inspire other artists to “further deputize or weaponize fans in their own business disputes”, unlike the comparatively less successful attempts by contemporary artists to own their music. Elle and The New Yorker hailed the “(Taylor’s Version)” tag attached to the re-recorded music as genius re-branding of Taylor’s back catalog. Money Marketing said that the situation helps understand “dangerous investing”.

Two songs off Taylor’s 2020 album folklore, “my tears ricochet” and “mad woman“, were underscored by critics for their references to the dispute, Borchetta, and Braun. On evermore (2020), the bonus track “it’s time to go” also mentions the dispute, summarizing Taylor’s feelings: “Now he sits on his throne in his palace of bones, praying to his greed. He’s got my past frozen behind glass, but I’ve got me.”